Helping to bring comfort and
understanding through knowledge 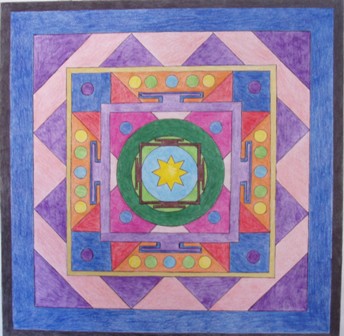 Wickipedia-Maṇḍala (मण्डल) is a Sanskrit word that means "circle". In the Hindu and Buddhist religious traditions their sacred art often takes a mandala form. The basic form of most Hindu and Buddihist mandalas is a square with four gates containing a circle with a center point. Each gate is in the shape of a T.

These mandalas, concentric diagrams, have spiritual and ritual significance in both Buddhism and Hinduism. The term is of Hindu origin and appears in the Rig Veda as the name of the sections of the work, but is also used in other Indian religions, particularly Buddhism. In the Tibetan branch of Vajrayana Buddhism, mandalas have been developed into sand painting. They are also a key part of anuttarayoga tantra meditation practices.

In various spiritual traditions, mandalas may be employed for focusing attention of aspirants and adepts, as a spiritual teaching tool, for establishing a sacred space, and as an aid to meditation and trance induction. According to the psychologist David Fontana, its symbolic nature can help one "to access progressively deeper levels of the unconscious, ultimately assisting the meditator to experience a mystical sense of oneness with the ultimate unity from which the cosmos in all its manifold forms arises." The psychoanalyst Carl Jung saw the mandala as "a representation of the unconscious self," and believed his paintings of mandalas enabled him to identify emotional disorders and work towards wholeness in personality.[6]

In common use, mandala has become a generic term for any plan, chart or geometric pattern that represents the cosmos metaphysically or symbolically, a microcosm of the Universe from the human perspective

When you create a mandala you go on a spiritual journey of discovery, where you can tap in to your own higher self and become closer with your guides and inspirers and because of this; it is a lot easier to solve a problem or situation within your own life whilst creating one.

Not many realise that by sitting to create a mandala you are also sitting to bring about a change within your life. Each mandala will have different meanings shown in symbolic form. When the Tibetan or Buddist Monks create mandalas and they have finished, they then destroy them. They do this as it is all part of their spiritual journey and I suppose it is a bit like us saying ‘Amen’ at the end of a prayer.

How to create a mandala

Have some calming music playing in the background

Imagine a change that you would like to bring about within your own life and then imagine a symbol that represents this change to you and place this symbol in the middle of your paper. This will become your central focal point.  Then place a circle around this symbol and a square around the circle with four gates (T- shaped).

Ask yourself a question... what is the first thing that comes in to your mind as to why at the moment this hasn’t happened for you and then think of a symbol to represent this reason. Place the symbol at each of the gates. Draw a circle around the square and gates.

Ask yourself, why this is stopping you and when you have your answer choose a symbol to represent this reason and place it around your circle.

You continue in this manner until you reach the first reason as to why you feel you cannot do right now that which you would like to do.

You have a basically started with the answer and read backwards to find the road map to help you understand properly as to why and what is needed to happen in your life to make your initial reason happen. You might even find on that journey that you no longer feel the need for this in your life and instead read the symbol as something very different.

When I have seen people creating mandalas in my workshops, some can become very emotional, others have actually felt the healing coming to them.. I always recommend a break after creating a mandala as you can become altered in state and need to catch your breath again. Try not to choose changes that are too big or too open, instead choose one small thing to focus on at a time.

I suggest to all my students with whatever form of psychic art they are creating that they date their work as when you look back, you can be quite shocked to see just how far you have travelled.